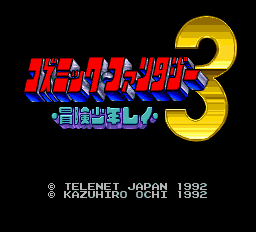 Zenic Reverie’s post on Cosmic Fantasy 2 says “It’s the games like this: bland, mediocre, unpolished filler that makes it difficult to feel motivated to play another hour.” I agreed with that assessment for Cosmic Fantasy 1, and I agree with it for CF3 as well — in some ways CF3 is worse than 1. We have an uninspired plot, a bland battle system with a high encounter rate, and disappointing visuals and cinematics. The game takes place in the same milieu as the first two, with the “Space Security Force” and their team of space cadets solving various problems. 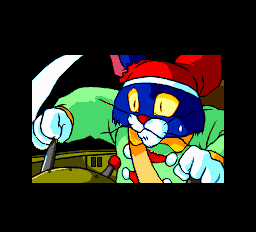 The game begins with Nyan, the cat merchant from CF1, being attacked by other cat enemies. He crash lands on a planet, and the story switches to Rei, the hero. He has mysterious healing powers. His first task is to sell some herbs of their small village at the capital. 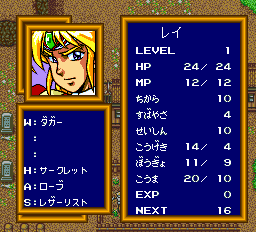 The battle system is the same as 2. It’s your basic AMID — the only innovation is that you can choose the order your guys act. There’s also an auto battle. The first big problem is the random encounter rate, which is commonly mentioned as a bad point of the entire series. It’s not only high, but seems very regular, about every 6 steps or so. The game balance is all over the place — at times you can mow everything down, and you’ll level up (and recover your MP) before you run out of healing. Other times enemies kill you from full HP with a single critical hit. There seems to be nothing in between those two extremes, although fortunately it was more often “mow everyone down.” The bosses on the whole have low HP and can’t really do much against you, except for the first boss which could critical everyone to death.

Rei meets Doga, the bearded guy above, by healing his wife. We also discover that children have been kidnapped by some monster — not Mamon, who joins the party, but Guru, who is the boss pictured above. The game has no world map, or even a transition screen between towns and the outside area. This at least is somewhat fresh compared to other games, but combined with the ridiculous encounter rate it’s hard to find your way around. After the detour of saving the children, Rei heads off to the capital to sell his herbs. Afterwards he reads about Princess Diana’s upcoming marriage. Now Rei heads north although I forget why — he happens upon Nyan’s crashed ship. 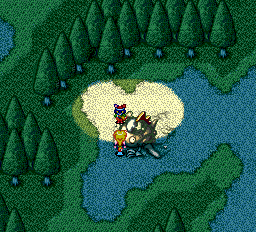 Making our way back to the capital, of course Nyan has to sell Rei stuff, including a bridge for 1000 gold. Back at the capital, there are new posters up for a battle tournament. The winner will become one of the candidates for Diana’s hand. Nyan basically tricks/forces Rei into entering, selling him an item that lets him beat the leader. Now the king gives all the candidates a mission — find the Sebulrakis Stone in the royal tomb and bring it back. Jay, a knight who is in love with Diana (but not one of the candidates) comes along in our party. 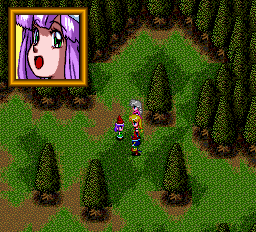 Along the way we save fairies and get a flute. It’s hard to see where the story is going. 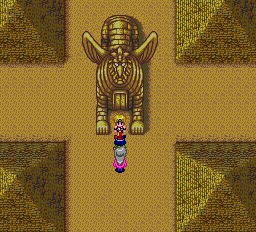 Finally we reach the tomb, and have to make it through three trials to reach the Stone. The first trial is just to return alone to the tomb (fortunately the encounters here are easy). The second is to solve a rock pushing puzzle. The third, which happens automatically, is to save one of the other suitors from a jail cell. Finally we recover the stone — but it turns out one of the other suitors has faked a stone and “won” the contest! 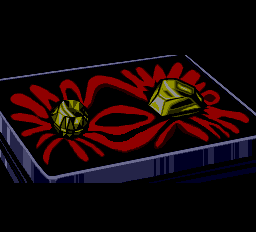 But Nyan has another Sebulrakis Stone and is able to prove which one is the real one. Jay gets the princess, and Nyan gets the stone — it turns out he is looking for seven of these stones on the planet for an unknown reason, and he ropes Rei into joining him on his journey.

Now the story switches to space, and the CF1 and 2 characters. The Space Pirates from the first games are back, with a convoluted plan to go back in time and prevent the Cosmic Hunters from being formed.

They’re breaking into the Space Pirates ship to defeat them. This is where I stopped.

I guess it’s nice to see the old characters again, but this game just isn’t very good. The story is all over the place, the system is boring, and the encounter rate is too high. Unfortunately there is one more Cosmic Fantasy game in 1995 (split into two parts) — maybe they will have fixed some of the problems by then.

Now it’s back to Super Famicom with Shinseki Odysselya, a game with mythology influences.