What a disappointment. Legend of Heroes is one of my favorite series; I played Sora no Kiseki in 2007 or so and have played all the games since then except Sen no Kiseki III (I don’t have a PS4). I certainly didn’t expect the earliest entries to be masterpieces, but I hoped they’d at least be playable.

Legend of Heroes was originally part of the larger Dragon Slayer saga, a series of PC games by Falcom. Like most of Falcom’s games, it was originally developed by them for PCs and then ported to all kinds of different consoles by other companies. The PC Engine version was developed by Hudson. Zenic covered the first game, which did come out in English. It doesn’t sound like he had any particular problems with it. 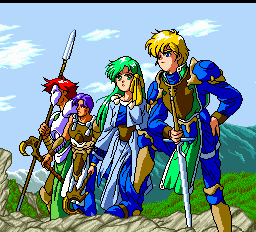 The game begins with an animated introduction showing the main characters, the staff, their VAs, etc. The music is awesome as usual for Falcom — they’ve been consistently producing high quality music in their games for over 30 years, especially when they get access to the CD technology.

Then we begin the game. 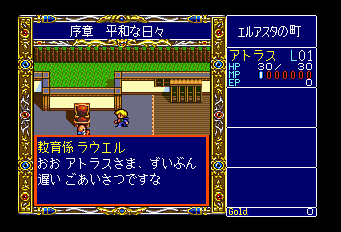 The way the screen is laid out is typical of PC games; to reduce the processing and graphical power required, they often had parts of the screen devoted to static elements (like the name of the chapter at the top or the status information on the right. There is a lot of voicing in the game, even outside of cutscenes. This is something normal in the PSX era and beyond, but it’s not so common in the PCE games I’ve played so far. Rather than half-assing the port like the Xak crew (see the next post) they put a lot of effort into using the CD technology to enhance the game. 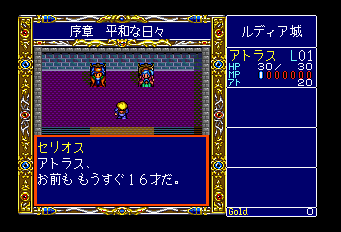 The main character is Atlas, the son of Serios, who was the hero of the first game. At the beginning, Serios tells him to go out into the world with letters to four kings, to prove his worth and also to register towns with his warp wing so that he can go back to them later (yes, Serios actually says this). Currently the world is at peace so there are only easily defeated slimes around. As in LoH 1, you can see the enemies on the world map. I always like this over random encounters. If you run from battle, though, you appear right next to the monster and if you don’t immediately run away, it’s back to the fight again. 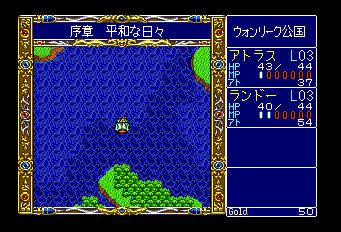 Along the way Atlas is joined by Rando, a magician who can also fight. After visiting only two castles, though, Atlas attends a festival. Monsters come out all over the world, and this is where the game begins for real.

So I was really prepared to like this game and play it to the end — a simple, classic RPG with a fast battle system and movement, lots of voicing and cutscenes, and great music. So what’s wrong? It is by far the grindiest game I have played on this blog yet. Maybe it gets better later in the game, but at the beginning you have to grind 4-5 levels earning only a few XP per fight. And each fight takes most of your resources. I tried to move ahead to the next dungeon several times and couldn’t even get past the top floor. Richie, who has written a ton of walkthroughs for SNES games, is very reasonable in his level suggestions and does not recommend ridiculous grinding. His recommendation for this dungeon is level 9, and I was at level 5. There’s no way I’m spending hours grinding up four levels at 1-3 XP a pop. If this were a Super Famicom game I’d have to power through it but for a PCE game I’m going to move on. Sorry!

EDIT: Here’s a comparison screenshot between the Super Famicom (left) and the PC Engine (right).