This block of PCE games is 3 for 3 on ports of computer games. I played Xak I for Super Famicom earlier in this blog. However, only the first game was released for SFC. This was actually the last straw that encouraged me to add PCE games to this blog; I kept encountering games that were only partly released for SFC or that had superior PCE versions. In this case, I actually think the SFC version is better in every way with one exception.

As I mentioned in the above review, this game is clearly inspired by Ys to the point of being a ripoff. It’s nowhere as good as Ys in any respect, but it echoes it in almost every way. The SFC version had completely changed the battle system to a “swing your sword” type of RPG, but the PCE version retains the original “run into enemies” system that it shares with Ys. Obviously this was developed to save resources on the PC. The main difference is that in Xak you have to hold a button down to have your sword out. If you’re high enough level you can just run into the enemies and they’ll die.

I won’t cover Xak I again; it’s the same as the SFC version. On the whole it’s much easier than the SFC version, especially the annoying dragon riding section that I criticized in my SFC review. The PCE version is very short and the final dragon boss dies literally in one shot. Like Ys you get a lot of random game overs when enemies trap you or you approach the enemies the wrong way, but you can save anywhere and the game goes by quickly.

Part of the reason I wanted to play Xak II is that it seemed like they left a lot of story elements hanging at the end of the game — there were several characters that barely were in the game at all, and there’s the intriguing plot element that it was actually Ratok’s “hero” father who had released Badu, the final boss of the first game. I figured this would be like Ys II, which was the conclusion to the story of Ys I. Unfortunately, Xak II has very little to do with Xak I — Ratok’s father doesn’t appear in the game and is only mentioned, with no resolution to what happened with him and Badu. Two characters return from the first game but nothing they do or say really links to what happened in the first game.

So Xak II begins with a cutscene. One of the disappointing things about this port is that there are only three places with voice — the opening, ending, and the scene between I and II. They should have at least voiced some of the important dialogue during the game too. The cutscene is the very stereotypical anime/RPG thing with an evil boss Gospel and 4 underlings talking in vague terms about secret plans and killing the hero, blah blah. We then switch to Ratok, who has set out for Banuwa village for two reasons — he heard his father had been seen there, and there’s a doctor who can cure his mother’s blindness. As it turns out Ratok will neither cure his mother nor find his father. Utter failure! 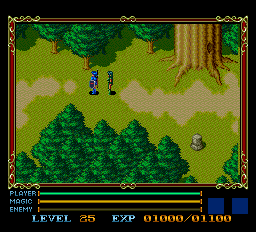 Along the way he saves Shana from some goblins and leads her back to town. She normally lives in the forest. Then Ratok gets drawn into doing random jobs for the villagers — he hears about the 4 people from the intro cutscene and agrees to go after the first one. Apparently Banuwa has one of the Xak Deepuls (Ratok used two of them in the first game) that is protecting the town, but that won’t last long. 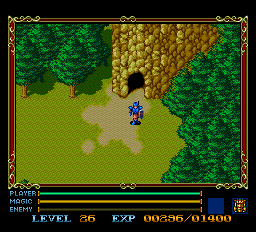 Ratok retains his level, but has to give up all his equipment and start over with that. At this point I made a huge mistake. There’s a new option in Xak II called “Force Shot” which you can turn on and off. The choice seemed to do nothing, so I ignored it and accidentally left it on. As it turns out, if you enchant your weapon at the magic shop, you can turn on Force Shot to shoot out energy. But this greatly weakens your defense. Without knowing this I was basically playing on hard mode for the first segment of the game, wondering why the enemies were doing so much damage despite having pretty good gear and levels. Once I figured this out the game got a lot easier.

The first area is this forest, where Ratok meets Shana’s grandmother (as a disembodied voice) and a traveling group including a bard, who play little role in the game. Ryun also returns from the first game — his role in the first game was very limited, and it’s limited here too. 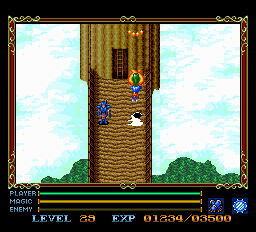 You have to go through this annoying part. If you even barely touch a pixel of one of the holes, it’s instant game over. And those harpies knock you back with hits. So you have to save a lot, although jumping helps. Finally we reach the first of the four main bosses, Ob Bogleus. 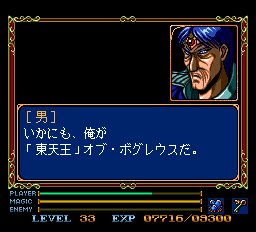 The strategy for bosses in this game is all the same — turn on Force Shot and hold down the button, and the boss will die in a few hits without being able to move. I watched a video where someone did it without force shot and even then the bosses take 2-3 hits to kill. One reason for this is that it’s very easy to overlevel. The designers did not copy Ys’ system of reducing the XP you get for monsters as you level. This means it’s very easy to level, and the further you go in the game the faster you level. You’ll reach the max level of 50 well before the end of the game. After beating Bogleus we find Myun, a girl who looks exactly like Shana. Bogleus warns us not to let Gospel have her. Ratok also finds one stone.

Next, the mayor asks us to go to the western valley to rescue his daughter and some other villagers.

The boss here is Eb Feeru, who yields another stone. 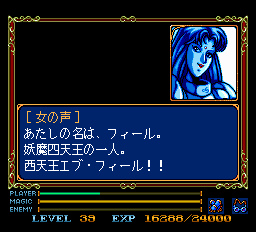 Next, Ratok takes a fountain teleporter to a castle to find the third boss, Val. This place has annoying jumping parts. 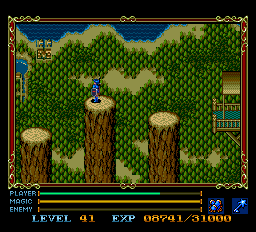 You better save after each jump here, because if you’re off by pixels it’s an instant game over. I don’t know who thought it was a good idea to put these jumping things in the game. Anyway, Val goes down instantly like all the other bosses, and Ratok gets another stone. For some reason the game forces you to be at max level to reach this boss, but the enemies give so much XP that’s quite easy to do.

The final dungeon requires taking a ship to get to, which brings back a number of the earlier characters from the game, none of whom really have any effect on the story or are very memorable. The ship is attacked by the final of the four generals, Rob Necromancer. As usual, holding down the shot button is instant death for the boss. Necromancer is able to sink the ship, and Ratok washes up on the beach with the final dungeon, Death Mountain. Ratok also receives the strongest sword, but there’s some sort of bug which duplicates the 5th armor in the 6th slot; I don’t know what was supposed to happen, but it doesn’t really matter. 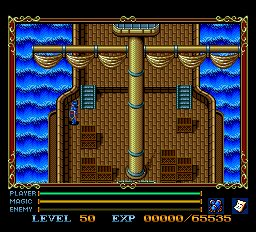 The final dungeon requires putting all the 8 stones Ratok has collected (2 are in the dungeon) in various statues, opening the way to another dragon and another shooting scene like Xak I. It’s as pathetically easy as the Xak I version. 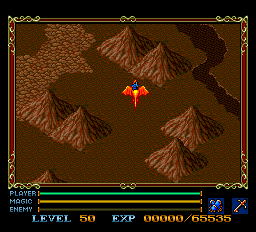 Now Ratok reaches the final boss, Gospel. He has two forms, but both of them go down instantly to force shot; I didn’t even see what the second form really looked like since he was partially off screen. 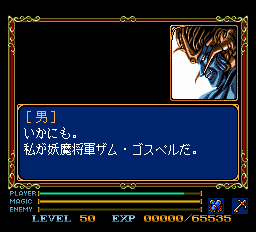 After beating the boss, Ratok reunites with his friends who survived the shipwreck. Pixie has now grown to full size (something about the energy radiating from Gospel) and so she gets to fight with Frey from the first game over him. Ratok then sets out for another adventure.

To sum up: this is Ys, but worse in every way. It’s not a terrible game, but if you’ve played Ys you’ll just be wondering at every point why they made the decisions they did. The game is far easier. The plot is nearly nonexistent, with characters in the game who serve no purpose and are barely memorable at all. Ratok doesn’t accomplish any of the goals he sets out to do, and the seeming promises of Xak I are not followed up on. If you really like Ys I guess this is worth playing since it’s not very long, but they could have done a much better job.

We’ll be back to the Xak world in a while with Xak III, the last game in the series (other than a few side games). Next up it’s back to the SFC with Silva Saga II.