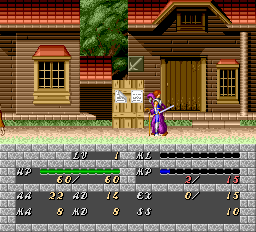 This is going to be a fairly short post because I have run into emulation errors, or perhaps a bad dump (although someone else has submitted this game as a bug in mednafen). The game is an action RPG that has a 2D platforming style, sort of like Exile. It is just as deadly as Ys, with enemies able to kill you instantly if you get too close. However, you can only save in towns, which increases the difficulty. One distinctive feature is that if your level is high enough, lower level monsters will not appear. So this prevents you from overlevelling but has the side effect of limiting the amount of money in the game — something one of the walkthrough sites warns about.

The emulation problem is that the movies don’t play, or only a few images show from them. The game starts with a rather long opening scene, of which only a few parts can be seen (but the dialogue is audible). I watched this movie on youtube to begin.

The backstory is that Auleria was a world where different races lived in harmony, but then the king was killed and five continents took their own routes, although the peace was kept by an alliance between the kingdoms. The story begins when a war is about to start between the kingdoms. One of the lords, Albert (who is a monster of some kind), is visited by a prophet Georg, who seems to be telling him that he can defeat the other kingdoms, starting with the weak “mouse” kingdom (just a metaphor).

Albert’s forces head out, as we switch to the main character. He lives in a little town; we see his friends and family, then he heads out to buy medicine from an nearby town. Of course while he’s gone the enemies destroy the town and when he gets back, the entire place is a burning mess and everyone is dead. So the main character heads back to the nearby town to find out what happened. 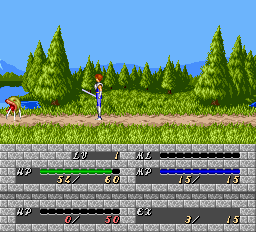 After poking around in the village, he heads off for the castle. Michael, the one survivor, went there to tell the king what happened. This is where the action starts — it’s just swinging your sword, basically. There’s an MP gauge that lets you charge up and shoot some fire from your sword, but I didn’t find that very useful.

At the castle, our hero learns something of what happened (just that 5 magic monsters came to destroy the town). Michael tells him that his younger brother Karl might fight with the hero. But Karl says he wants Michael to come home first — Michael has headed off to a cave, which is the first dungeon. 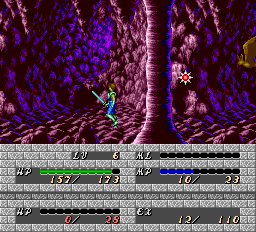 I died a bunch of times in here, but after levelling and upgrading my gear I finally found Michael. Now Karl joins the team. At this point the game becomes a bit easier because you can switch between the hero and Karl, each with their own HP gauge. The next goal is to be able to pass the barrier to the next kingdom, but first you have to do a sidequest involving a crooked weapons dealer. This requires going back into the cave and exploring new areas and beating a boss. But after this a movie played that I couldn’t see again, and I thought that was good enough.

It’s too bad the emulation didn’t work, but this isn’t that good of a game anyway. Next up is Tensi no Uta II, the sequel to the 1991 game I played earlier. There’s also a slight change — I think I’m going to skip Laplace no Ma for the PCE and play it when it comes up on the Super Famicom instead (despite being in some ways a different game). But I had Tengai Makyo Fuun Kabuki Den in the wrong place so that will be after Tenshi no Uta II.