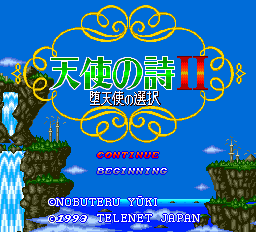 This is the sequel to the 1991 Tenshi no Uta, which I played earlier this year. At first it doesn’t seem like a direct sequel — the first one took place basically on Earth (in Ireland and England), but this takes place in a completely different fantasy world. But we’ll get to the story connections to 1 later.

There’s not a whole lot to say about the gameplay. It’s completely standard Dragon Quest-style AMID. You can deal with most battles just by holding down the turbo button. The bosses mostly take the same strategy; cast whatever buffs and debuffs you have, then heal and attack until they’re dead.

The music is pretty good just like in the first game.  Here’s the OST; I don’t know if the time link is going to work with the embedding, but around 10 minutes is the dungeon theme, and about 4 minutes in is the daytime town theme if you want some examples.

The game begins with the main character, Fate (subtle name) and his friend Shion. 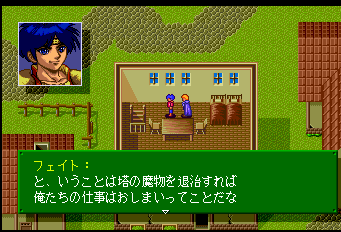 A welcome change from the first game is that the severe inventory limit is gone — it now seems to be effectively unlimited although I don’t know if there is a cap somewhere. Shion and Fate go to clear monsters out of a nearby tower. Although the door won’t open at first, an earthquake breaks it open. At the top of the tower they find a boss, and then a girl. 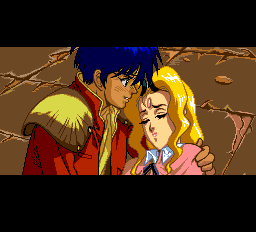 The girl is Riana, who has lost her memory. They head back to town, but that night, the town is attacked by demons that seem to be led by a Dark Church member. Despite the name, Shion was actually a follower of Dark Church and is surprised to see this. The three of them escape through an underground tunnel, but Shion can’t believe that Dark Church was really involved and decides to go out on his own to find the truth. Meanwhile they meet up with a desert nomad Jia, who I don’t have a screenshot of. She wants us to escort her back to her village, but she joins the team.

The next destination, though, is a town of Dark Church believers. There, we sneak in by making them think Jia is part of the circus. There we release a number of prisoners from cells, and learn that Dark is trying to unify the world under their own rule, and is building some kind of flying Ark. Our next party member Ranzo is also there. 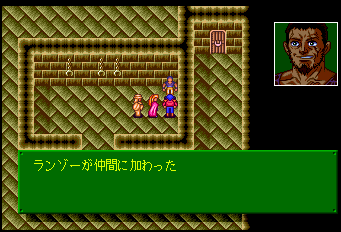 In the castle we learn that King Ragnakang is working with the Dark Church to unify all the world under one culture, in order to oppose the monsters. At his side is Ramiam, a Dark Church priest, who Jia seems to know. The result is that we need to get back to Jia’s village Rahasa as fast as possible, because the Dark Church is going to attack it. Ranzo can help unlock the door to a tower we need to pass through. 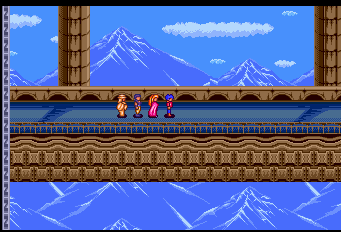 After a quick stop in Ranzo’s town, we finally reach Rahasa. It turns out Ramiam was Jia’s fiance before he left for the Dark Church. The elder thinks Riana might be an angel (big surprise) but he has a little mission for us to do. We head up to a cave where a Dark Church priest is summoning a dragon. The dragon immediately crushes him to dust, but we manage to defeat him. But for the second time in the game, we return to a destroyed city. 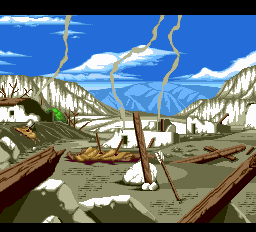 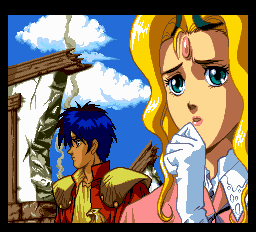 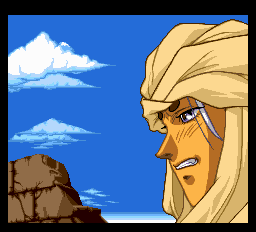 The Dark Church has destroyed the town, and Shion is with them. He has completely bought into Ramiam’s plan to build an ideal paradise, but that will require making sacrifices — apparently this village is one of them. Jia leaves the party.

We continue our journey, coming across Shion’s hometown. There’s not much to there except get attacked by Dark Church followers — but then saved by Marius and Alma, two people from the Dark Church. Apparently not all the Dark Church people are bad. Anyway, we get a new party member, Farn. He turns out to be the leader of a resistance against the Dark Church. 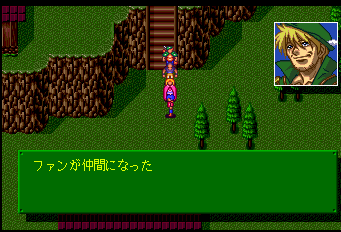 The party continues, trying to find a way to restore Riana’s memory. As is common in these games, it’s time to find a boat so we can get off the initial land. After a few intermediate dungeons, the party arrives at a harbor — unfortunately the only available boat is being used by the Dark Church. But as an honorable and upstanding hero party we decide to sneak onboard. Of course Shion is there, but also the knight Merouz, who for some reason tries to let us go when he hears Fate’s name. But Fate is determined to kill him, and Merouz has to knock him into the water. The rest of the party follows. We’re washed ashore but then immediately captured and jailed by the Dark Church. Ranzo lets us out, and Jia rejoins the team. 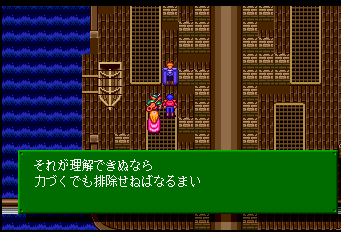 Soon we learn more about Ramiam’s plan — he is trying to find the Orichalcum for some unknown reason. The next boss is Baruva, who has fused with Lucifer cells. Lucifer was the final boss of Tenshi no Uta 1. 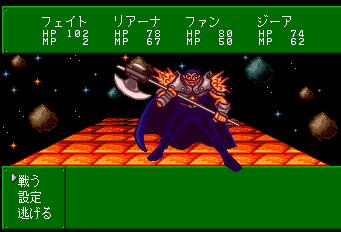 After this, Raphael arrives to see Riana. He confirms that she’s an angel, but seems upset with her — she’s supposed to be completing two missions. One is to eliminate the Lucifer Cells from the world below, and the other is to pass some kind of “judgment.” But he leaves before we learn the full story, and Riana is still without her memory. Also we still don’t have a ship, but that is soon rectified after a couple of fetch quests. Now we can travel all over the world! There are a few side quests I’ll skip in the interest of space. One of them is very useful, though, because it gives you the Heal Staff. Unlike a lot of games, this can be used out of battle, so it’s basically free unlimited healing when you find it. The shop also sells the strongest armor for Riana and a few others.

I’m going to summarize the next part because it’s one of those grand multi-fetch quests you often find in RPGs. A magician Dewey joins up and we find out that Ramiam is trying to open the Demon Gate in order to summon a whole bunch of demons to the world. In order to stop this, we have to find a demon sword and three items that will let us open the way to where he is and stop him. 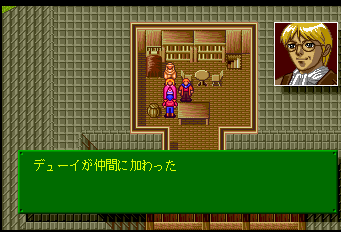 After getting all this and heading to where the Demon Gate is, the first step is to fight the knight Merouz. 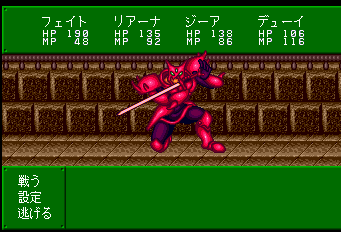 After Merouz is defeated, Ramiam tells us that the Demon Gate required the blood of two relatives fighting to open it — the suggestion is that Merouz is Fate’s father. The gate opens, and sucks Dewey in. 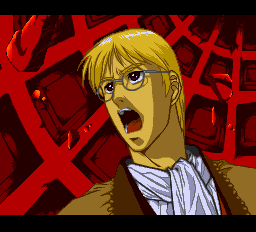 But Fate throws the demon sword at the gate, closing it, although Dewey is lost. Now that Ramiam has failed to open the Demon Gate, his next plan is to activate the Ark (Agnea). Fate and company try to stop him from getting the Orihalchum but they’re too late. Marius and Alma, the Dark Church people from earlier, are waiting for Fate, as they now want to join him against Ramiam. But Ramium shows up on the Agnea and kills Alma, and captures Marius. 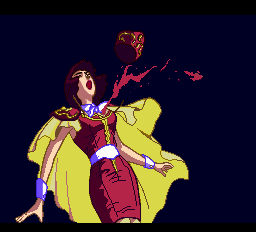 Before that, they had told us we should try to activate a second Ark, the Sero. This requires another sequence of fetch quests, ending on the deck of the Sero against a Beruva, who still has the Lucifer Cells. 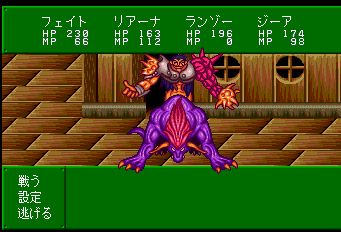 Afterwards, Shion and Ramiam show up. Ramiam captures Riana so that he can use her power to merge with Satan [I wonder why this was never localized?]. Shion finally sees through Ramiam’s plans — he doesn’t join, though, preferring to try to stop Ramiam on his own. Now we have an airship! 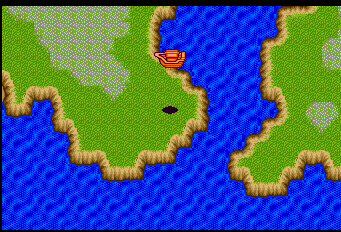 Now we can go anywhere in the world, so there are a few side quests and optional events to do. After that, we need the “last key” to be able to open a locked door in Excazan Castle, where Ramiam is. Descending to the depths there, we find Riana trapped in some kind of sphere, with Ramiam and King Ragnakan nearby. 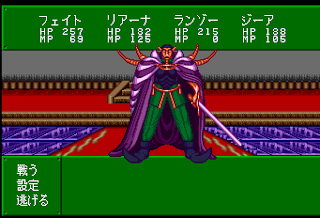 Riana is able to break out, but we do have to fight the Lucifer Cell infested King Ragnakan. Fortunately Riana is back so she can cast the very powerful attack up spell that makes these bosses fairly easy. I think I’m going to stop the post here at this climactic point because this is probably 2/3 of the way through the game. What will happen when the party confronts Ramiam in the castle? Find out next week, as well as how the game connects to Tenshi no Uta 1.

Overall this game is OK. The battles are boring but with emulator speedup they can be dispensed with quickly. The dungeons are short and rarely have anything particularly interesting in them, but the story is reasonably entertaining.