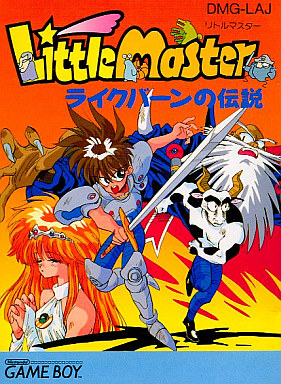 After Fire Emblem, it took a year for the next game to come out that falls within my definition of an SRPG. It’s for the Game Boy, and predictably it’s considerably shorter and less ambitious than Fire Emblem. It spawned a short franchise, with Little Master 2 coming out a year later, and then a third game for Super Famicom in 1995.

The games are clearly building on the structure that Fire Emblem started, but they do introduce new elements of gameplay. Except for a few unique characters, your party is made up of various monsters, who can be combined in temples to grow into stronger monsters. Each stage is slightly different, with gimmicks or tricks to keep things interesting. While the game is quite short at 15 small stages, that’s typical for this era of the Game Boy. Having a game that you could take with you anywhere was enough of an advantage that even a not-so-exciting game could sell.

The gameplay is very basic. It’s standard SRPG. Your characters can move up to level 8, and there is no equipment or items. A unit attacks, the other unit counters. It follows FE’s player turn/enemy turn system. Most of the stages can be repeated as many times as you want, so there are opportunities to build up your characters and try to use the monster combination system to get different units.

The game begins with the opening story. Dark King Gezagain suddenly appeared 6 months ago on a stormy night and took over a bunch of kingdoms. The kingdom of Lainark is also under attack and facing destruction. The main character Lim, and his close associate Moomoo (the cow in the picture above) are sent out by the king to fight against Gezagain’s forces.

The first 10 stages have no developing story; the king just sends you out to a particular place to deal with some troops of Gezagain.

Scenario 1 – The Hero Sets Out 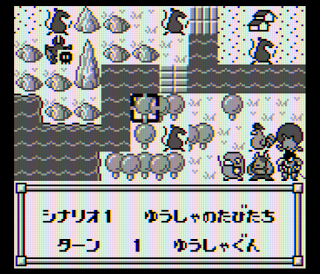 You begin with the hero, Moomoo, and three additional monsters — a Sheepman, a Chickenman, and a Treant. Treants can walk over rivers. The other two don’t have any specialties. Other monsters can attack 2 spaces away or fly. This is a very small and simple stage, with nothing tricky about it. The house gives you a Mouseman. 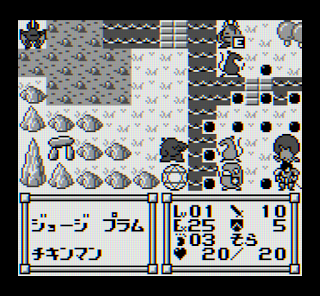 This is the stage with the first temple. By moving two monsters onto it, they can be combined into a bigger monster. The hexagram at the bottom is a heal point. Any unit (enemy or player) moving there regains all their HP. However, if a unit is attacked while on the hexagram, it breaks (units can be counterattacked there with nothing happening). This does add a bit of strategy because you need to be careful about how you use the hexagrams, or which monsters you attack. 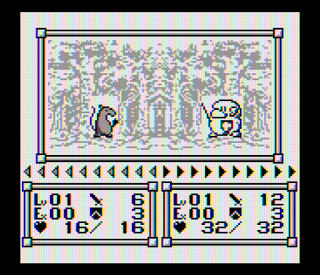 The gimmick of this stage is that whirlwinds come randomly at the end of each turn and move a unit to another random space.

The boss of this stage appears after you chase a lake around for a while. At this point my hero and Moomoo were gaining a lot of levels (8 is the maximum) although I tried to level some of my other guys. If anyone is defeated, they leave the stage and their XP resets to 0 (although their level remains intact). The combination is based on the units’ “rank” and level, so combining two low level units like I did above won’t give you much good. 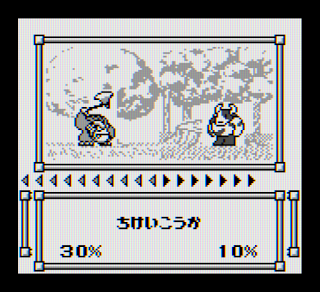 The boss cuts down a tree every turn. If you let him cut down all the trees, extra enemies appear.

Scenario 6 – Deal with the Dam 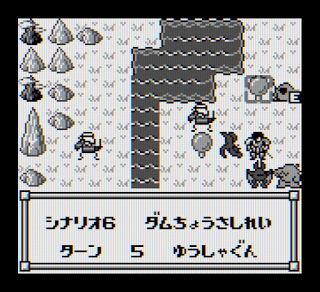 Here you have to reach the Dam square, which will dry up the water and reveal the house with the boss. 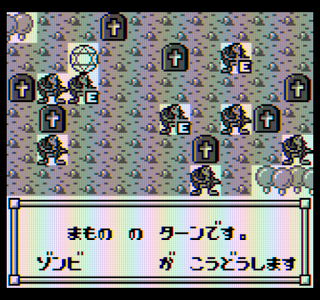 Zombies come out the graves, although they can’t move very fast. By attacking one of the tombstones you destroy it, and destroying all the tombstones stops the zombies and reveals the boss.

Scenario 8 – Mountain of the Falling Stars 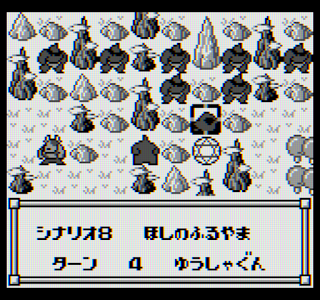 The magician highlighted above, when defeated, accidentally releases a huge magic burst that kills or weakens most of the enemies. The Cyclops are tough so this should be done first. By this point I was mostly using just the hero and Moomoo to beat everything.

Scenario 9 – Fly to the Magic Mountain 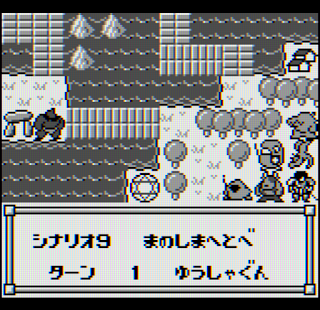 Fortunately you don’t have to use flying units, since a house at the top will release a bridge. I had some success here with a Wyvern unit that I had made at a temple.

Scenario 10 – Fortress of the Monsters 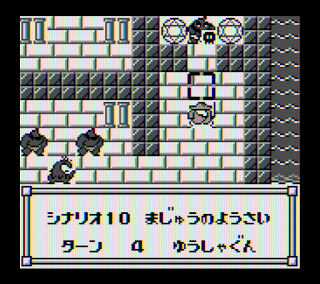 Supposedly this is the final stage as the king sends you to deal with Gezagain’s castle. Of course this isn’t the end of the game, though, the boss of the stage isn’t even Gezagain.

After winning this stage, it turns out it was just a feint to draw your attention away. The king is wounded and the princess captured. 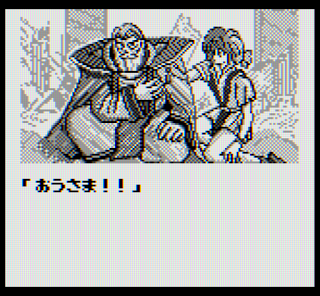 So the story actually begins here, and I’ll cover the last 5 stages in the next post.