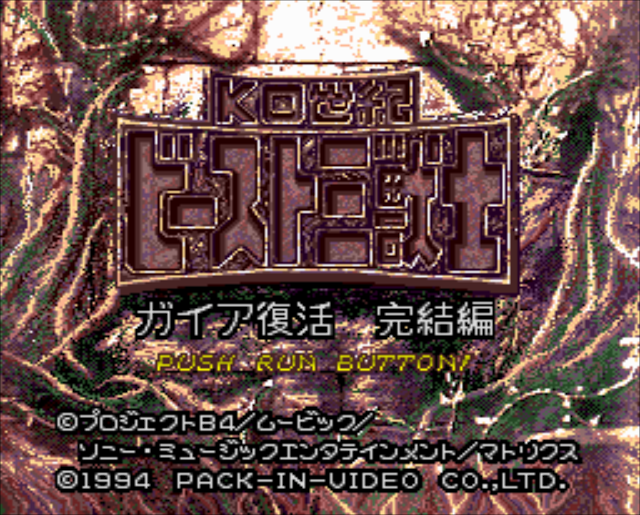 I’ve been in a bit of a slump with my playthroughs lately; the semester has been quite busy and I haven’t had as much time to play. I’m having trouble with Bounty Sword on my other blog and proceeding slowly through Slayers for this one. This will be a fairly short post since I only played this game for a few hours. (I also hate the new Blogger interface)

This is yet another game based on anime, this time an OVA. There were two games based on it for computers; the name “kanketsuhen” sounds like this might be a compilation remake of the two games but I wasn’t able to find enough information on it to be sure. Most of the anime-based games I’ve played so far have not been all that good; they tend to be unoriginal and dull, cashing in on the name value and putting in only a token effort to distinguish the game from any other RPG. I’ve played bad games based on anime (Fist of the North Star 5, 3×3 Eyes, Villgust), and just dull games (Ranma 1/2). This one is closer to the dull variety, although I suppose it’s not noticeably worse than a lot of the other games that were coming out at the time. 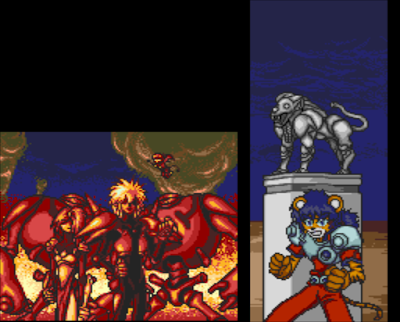 The Three Beasts, Wan Derbard (Wan Dabadadatta) of the Tiger Tribe, Bud Mint (Baado Mint) of the Bird Tribe, and Mei Mer (Mei Mah) of the Mermaid Tribe, are taken prisoner along with Mei Mer’s companion Tuttle Millen (Mekka Mannen, also of the Mermaid tribe), but manage to escape thanks to a little girl named Yuuni Charm Password. Together they seek Gaia, which they believe to be a fabulous treasure, but they are pursued by Uranus’s minions : V-Darn the vicious mage-knight, V-Sion the warrior woman, and Akumako, V-Darn’s sadistic imp-like partner.

This is exactly how the game starts, so they must be following the original story pretty closely. The opening sequence is fairly long, and the voice work is sadly limited — in the time I played I only saw two voiced sections, an opening cutscene narration, and one cutscene after that. 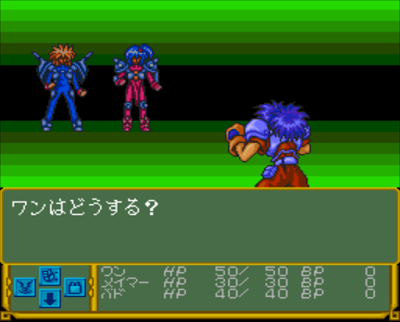 The battle system is fairly standard, but does have a “beast” option. This lets the characters (at least the three main ones) transform into their beast forms and do a powerful attack, at the cost of HP. They also get some sort of machine to allow them to cast magic with their BP, which I think stands for Battery Points. They can be recharged at stations here and there, although they were not common enough and I often had 0 BP — the instruction booklet might have helped more here, but it took me a while to even figure out how to recover them. 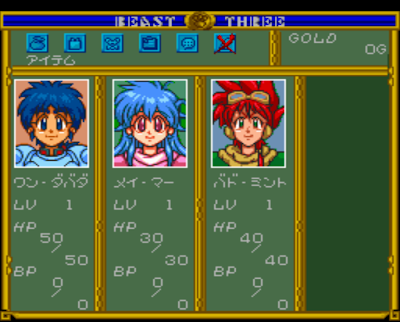 The characters escape their prison not only with the help of Yuuni, but with these beast god-type things that come from the home villages of the characters to fight them. So once they escape, the goal of the game comes to recover these beast gods and find out how to use their power to fight back against the humans. They first head to Wan’s home village, where they learn that the beast associated with the village has still not returned. They head out to a nearby mountain where it has been spotted, and you fight lots of random encounters along the way. 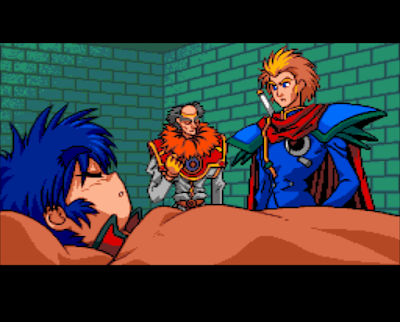 We’re joined by a human who seems to be some kind of prince in disguise; he found us after we escaped from the humans and crash landed with the beast gods. He’s a nice addition because he can equip all the stuff whereas the beast main characters seem only able to equip a weapon and a piece of clothing. 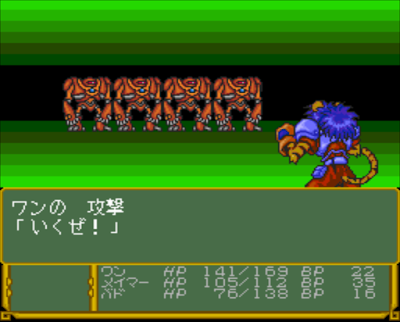 The team does not find the beast god at the mountain, so they head on to the mermaid town where Mei Ma is from. Everyone has fled the town and gotten trapped in an underground area, and we need gunpowder to blow it up. Once we do that, there are still people trapped that need something more powerful than the gunpowder, and it’s time to find this drill machine that should work.

This is where I stopped; I couldn’t figure out where the next town was and this was a pretty run of the mill game of the kind I usually pass over quickly on the PCE. It’s not a bad game and I think if you were a fan of the anime it would be fun, but there are better games on the PCE.

Next up will be another anime-based game, Slayers for the SFC.