Marth returns to his land. The main difficulties are just knowing when things will happen (e.g. the reinforcements) and not getting in range of the Shooters. 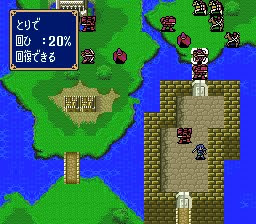 Est is captured there but the General inside won’t attack her so she’s fine until the cavalry arrives. I sent Marth around the side to visit the towns and had everyone meet up at the bottom. Abel joins our group and then we kill the boss.

Now we’re inside the castle. This stage reminds me of a book 1 stage with a lot of treasures but it’s not as hard. I lost a couple of times on the left side (just as I did in FE1) but once George can convince Astria, the stage gets a lot easier. I had Marth take out most of the enemies on the left side.

Fortunately in this game, thieves that steal treasure boxes will drop that treasure once they’re killed. So it’s a lot easier to deal with them in stages like this than it was in FE1. 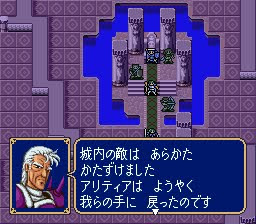 This is a simple stage because over half the enemies run away from you since they belong to the Gura kingdom. I didn’t get a screenshot, but as long as you don’t kill any of the Gura troops, the boss will join being persuaded by Marth, and then she can persuade the unit next to her.

This is yet another stage where most of the units don’t attack you. It looks bad at the beginning: 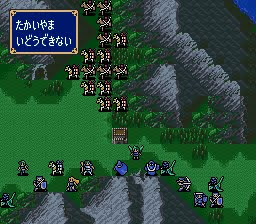 Fortunately all of those paladins and horsemen move to the top and don’t attack, otherwise this stage would be considerably harder. This is the main force, and is fairly small. The shooters can cause some havoc but with Armor Killers and Rapier it’s not too bad. There’s a secret shop that I bought some promote items from.

Oh god this stage sucked. I think I had to reset close to 20 times. 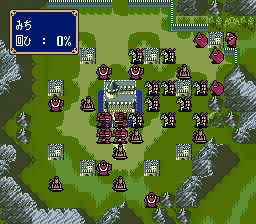 This center area is full of shooters and bishops with Worm magic. You have to take some of the forces through a pass to avoid them, and then go up and around. Then it’s a challenge to beat all these enemies without anyone dying. Do not approach the castle because if you step on a square next to the castle, reinforcements start coming out of all the forts.

I made a save state once I had gotten up on the right and most of my state loads came after that, trying to break into the center area. 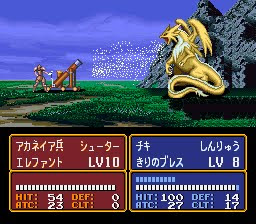 Chiki and Banutu work differently in this game than they did in FE1. They transform into actual dragons, which makes them much more useful.

Next update will hopefully be the last.