I’ve finished the game so the last two posts + review should come out staggered throughout this week.

Chapter 3 – The War of Liberation

This and chapter 4 have Alm and Celica’s parties on the map at the same time. You can choose which one to move, so you can completely finish one side and then the other, or switch back and forth. Periodically, new enemies will appear from the castles and chase you. I understand what they were trying to do here but it’s more annoying than anything else — if they move into your square you have to fight them but they get the first turn. If you do a battle and then they move into your square you have to fight that second fight without a chance to save, which would be annoying on a real console.

I started with Alm. Warp is very important in this game so the smoothest way to play is to do Alm’s route, kill Silque on the last map, and then resurrect her on Celcia’s side. A Japanese walkthrough suggested doing the first map of Celica’s side so you can get the Angel Ring (which doubles stat growths on level up) and then switch to Alm.

Alm is chasing after Rudolph, whereas Celica is heading to the Temple of Mira to see what’s wrong there. Along the way, Alm learns that a damn needs to be opened from time to time to release water, and if this isn’t done, eventually it will overflow and completely flood Sophia. But this requires both Alm and Celica to visit places on their side of the map, which is the main goal of chapter 3.

Alm begins by going through some grunt encounters and picking up a few new units, then arriving at the fortress of Dozei. Evidently I didn’t get a screenshot of this part, but with warp it’s not very hard to send some guys right to Dozei and the other difficult units and kill them quickly.

The next part is much harder, though. 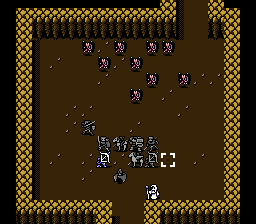 Ten gargoyles are tough at this stage — they are strong to begin with, and their high movement makes it difficult to protect your weak guys. This took me quite a few tries but eventually I was able to win and promote units. Yay! The Sacred Spear is also here, which does increased damage against monsters. Would have been nice against the Gargoyles.

Finally at the floodgate, there is a boss Tatara, who is controlling a girl to fight against you. This happens until you beat him, so what do we do?

After this map, the guardian of the dam tells us that in order to open it safely, we have to do something at the Mira Temple first. So time to switch to Celica’s side. She begins with a fight in a graveyard. 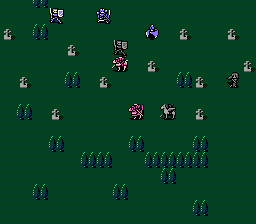 The gravestones have a huge terrain bonus for some reason, which is good and bad. It’s bad when a group of random bowknights moves in to the square after the main battle. They can sit on the stones and attack everyone. I had to actually use the “retreat” command here and have them follow me to a better place. The fight also turned into just one bow knight, which was easy enough to defeat.

A guy on the next map has a Dark Sword, which is like the Devil weapons from the first game — not really worth using.

Now Celica reaches the Mira Temple but the guy refuses to open the dam control for anyone but someone of the Sophia royal family. Of course that’s Celica but she has no way to prove it, so it’s time to head to Geese’s fortress. Along the way you get the choice of two routes, to get one of two characters. I went with Deen. 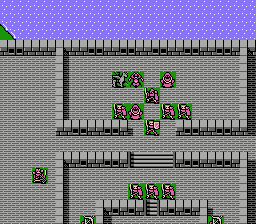 The fight against Geese would be hard except for Warp. Here’s one of the Pegasus sisters (now a Falcon Knight, one of the best classes) sent up to deal with him.

Now after beating Geese, we rescue Est (the third P Knight from the first game) and find a woman who recognizes Celica as Princess Anteze. Apparently Celica’s mother was a priest from the same temple as this woman, and was made Empress because of her beauty. But she died right after Celica was born. The woman has a circlet for Celica, as proof that she’s of the royal line. 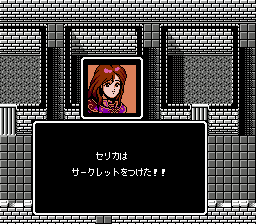 So now Celica can prove to the dam guardian that she’s a Princess. Both dams are opened and water is returned to Sophia. Now both Alm and Celica continue on their own paths to Chapter 4.

People on the Fire Emblem discord mentioned that the game gets more annoying starting in Chapter 3, and I agree with that. There are too many annoying stages, and the random enemies that appear are frustrating as well. Chapter 4 is far worse, though, but I’ll get to that in the next post.